2nd Annual Naughty or Nice Awards via The Hub 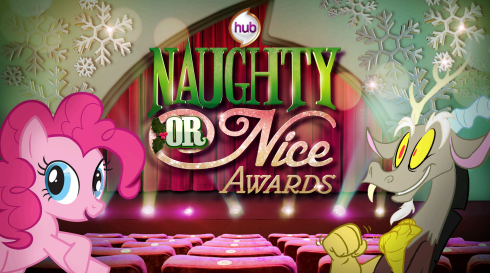 For everyone who was around this time last year, you may remember this contest: The 2nd annual Naughty or Nice Awards in which the viewing public gets to vote. (And you may also recall whose image they are using again.)

The nominations relevant to ponae are

The contest pages will go up on the Hubworld website eventually.

Below the official press release from The Hub.

LOS ANGELES – The Hub TV Network, one of the fastest growing basic cable networks, will kick-off online voting Saturday, December 8 for the first-ever “Naughty or Nice Awards.” Viewers can cast their ballot in eight categories for their favorite “naughty” and “nice” moments and/or characters from The Hub’s 2012 programming lineup. The voting results in all categories will be revealed during a two-hour marathon Saturday, December 22, from 12 p.m. – 2 p.m. ET, as the characters crowned the “Naughtiest” and the “Nicest” will be featured in two half-hour episodes each. Last year’s “Naughty or Nice” winners PINKIE PIE and DISCORD, both from the Hasbro Studios-produced animated series “My Little Pony Friendship is Magic,” will host the on-air event.

On Saturday, December 8, fans can go to http://www.hubworld.com/NaughtyOrNice to view select clips and cast their ballots for each naughty and nice category. After voting, a free holiday card can be downloaded featuring popular Hub characters that can be printed and sent to friends and family. Voting closes on Sunday, December 16, after which a winner from the following categories will be announced:

(After the page break)

The Hub’s Naughtiest of All:

Naughtiest Use of a Villainous Power:

The Hub’s Nicest of All:

Nicest Use of a Heroic Power:

About The Hub TV Network
THE HUB is a multi-platform joint venture between Discovery Communications (NASDAQ: DISCA, DISCB, DISCK) and Hasbro, Inc., (NASDAQ: HAS) with a goal of entertaining, enlightening, empowering and educating children and their families. The cable and satellite television network features original programming as well as content from Discovery’s library of award-winning children’s educational programming; from Hasbro’s rich portfolio of entertainment and educational properties built during the past 90 years; and from leading third-party producers worldwide. The Hub lineup includes animated and live-action series, as well as specials, game
shows, and family-favorite movies. The network extends its content through a robust and engaging online presence at www.hubworld.com. The Hub rebranded from Discovery Kids on October 10, 2010, and reaches more than 70 million U.S. households. The Hub logo and name are trademarks of Hub Television Networks, LLC. All rights reserved.

To find the channel in your area, please visit http://www.hubworld.com and check the channel locator at the top of the page.