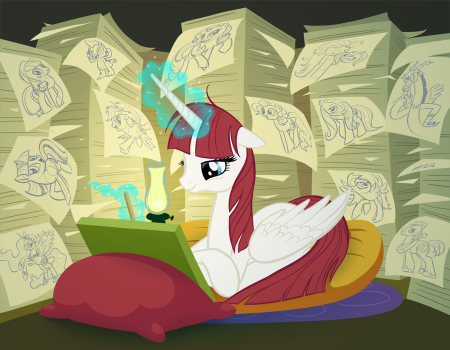 Welcome to another part of our HD compilation for BronyCon. Be sure to enjoy it in all of its beautiful visual glory…

Without further adeiu then, let us begin with the wonderful folks who make the show what it is.

EQI, the Equestria Inquirer has interviewed the singer, actor, but most importantly professional writer Amy Keating Rogers who has bestowed us with such gems as The Last Roundup and A Friend in Deed. (Follow Amy Keating Rogers, but also Joe Stevens and TechRat on Twitter.)

Equestria Inqurier interviews Amy Keating Rogers during BronyCon, where she gives some insight into her career as a writer for My Little Pony and other projects. Don’t miss the song!

Secondly, but only by post date and then by WordPress ID, they interviewed Nicole Oliver! (@mouthnoize on Twitter.)

TechRat and Joe Stevens interview Nicole Oliver, the voice of Celestia and Cheerilee!

Our phenomenal writer and story editor Meghan McCarthy (@MmeghanMcCarthy) has of course also interviewed, together with the man who should voice all emergency announcements, Peter New (@ActorPeterNew)! Find the EQI interview here.

Equestria Inquirer interviews Meghan McCarthy—the writer for some of the episodes of the show (such as Party of One and Lesson Zero)—and Peter New, the voice of Big Macintosh.

Equestria Inquirer interviews the most Twilightlicious of all people, Tara Strong!

And this is where we tun our view to talent in the community.

The BronyCon charity auction managed to net an estimated $6500 for Child’s Play! The BronyCon Charity auction, with items ranging from plushies, autographed swag, and all sorts of trinkets!

Real psychologists at BronyCon describe what makes up the everyday typical Brony, and what makes them tick! Dr. Edwards, Dr. Psych Olgey, and affiliates present their study findings on the personality attributes and generalizations that are most commonly found in the people who compose the Brony community while at the same time challenging those negative generalizations that are most commonly attached to the fandom!

Moving to one of the kindest artists around, EQI has also scored an interview with the inimitable Pixelkitties! (Who in turn does a very good job at imitating or emulating the style of the show.) She probably on your watch list anyway, but just in case, here’s her DeviantArt account.

Then there is also a fun interview with Jaxblade. (You can find him on YouTube.)

An interview with representatives of Canterlot Gardens.

Another one, this time with cosplayers: “Equestria Inquirer Interview: Daring Do Cosplay and Ed.”

A few assorted videos that have been posted by EQI/EFR: “Equestria Inquirer’s coverage of the convention floor, the cosplay contest, and the singalong that happened right outside in front of REO Mobile Media’s Red Giant.” This includes a few interviews with cos-players, various fans of the show, convention patrons, vendors, and all manner of bronies and ponies. There is also a bit of the cosplay contest coverage in here as well. More of the sort, in the separate post “Equestria Inquirer Coverage: BronyCon Freestyle.”

A little under three minutes with the folks with the red truck: “A short interview with a representative named Corey Nickels from REO Mobile Media, LLC, also known as the Red Giant. They were outside of BronyCon all day, both days, streaming My Little Pony related media, music, and even episodes when the convention was over.”

All videos are courtesy of EverFree Radio and the Equestrian Inquirer, with exception of the closing ceremonies video, which was uploaded by YouTube user Ferronthewolf. Now off into the future to see if EverfreeNW shapes up to be as or even more epic than BronyCon!