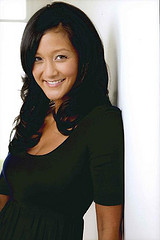 An article appeared online at the Vancouver Sun about Shannon Chan-Kent which has sparked a little debate and possible rumor milling.  The article itself is about the opera, but points out that Ms. Chan-Kent is the singing voice actor for My Little Pony.  People have picked up on something, here’s the article.
And if you’ve ever wondered what an opera singer might do in her time off stage, Chan-Kent has an interesting sideline; she’s an voice-over actress, going into her third season with the animated My Little Pony television series. “I do Silverspoon, the little sister pony, and I do all of the singing for Pinky Pie.” Chan-Kent thinks her ability to do high, child-like voices has been her appeal. “The voice-over world is a very small community, so I was extremely lucky to get an entrée into it.”
Now, the easy route would be to jump up and scream “oh my god” over and over while flipping your desk over and crushing your household pet.  Yes, it says third season with the animated MLP series.  But before the riots begin, this could be multiple things.
1.  A typo.  This article has a few:  Pinky Pie, Silverspoon (Pinkie Pie, Silver Spoon) but that’s very minor, but also means whoever was writing didn’t really pay close attention to details.
2.  Its possibly they mean its her third season with the opera company.
3.  Some feel maybe she has done VA work in previous generations.  I took the time and from what I see, no.  Her wiki article is very basic but only lists MLP:FiM, and google search reveals no connections between her and previous generations.
So take it with a grain of salt.  Remember a few things we know about Season 2.  If not mistaken, the budget was lower than Season 1, and bottom line is Hasbro is a company, that wants to make money.  I don’t see them jumping that far ahead to contract a season 3, when Season 2 hasn’t even hit. Nor has there been a ton of merchandise released for FiM (you want to bet merchandise will be insane this xmas season).  Also that Season 2 is still in production, supposedly ending around December.
So for now, big giant rumor, but feel free to discuss, and not storm the gates.
(Thanks to Hoppip for the info)
Tags: news
← [Comic] Dummy Marks for Cuties
Feature: Ask Pony Tumblrs →