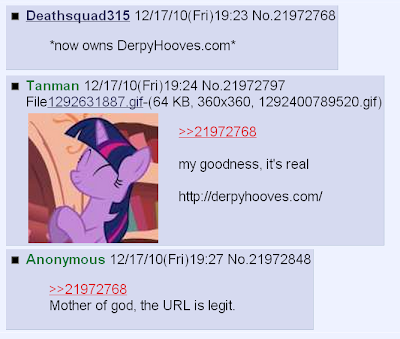 First off the bat, DerpyHoovesNews aka DerpyHooves.com celebrates an (almost) full year of operation.  The site went online a year ago today, but it was about 10 more days before the very beta version of what exists now went online.  For the first 10 days it was more or less the default picture of Derpy with the letter in her mouth and wearing her mailbags.
I had this big post written out, but I’m going to wait.  Started off as a boring history lesson about this site, but I’m going to save it for another article I’m writing (more or less a history lesson about the early days of the fandom, when it was nothing more than /co/).
#2 – Derpy 99% Canon Now

I’m saying 99% canon because there’s one missing piece to the puzzle, getting the lips of Hasbro to say the name.  Just about everyone related to the show has now said it, this includes…
Now of course Hasbro will probably come up with their own name, they seem to like “twilight” in the name.  And of course this doesn’t mean she -must- be called Derpy now for you Ditzy Doo lovers.  I’ve always been fond of Bright Eyes.
#3 – The Word of Faust: Spike’s Upbringing.

Even though Faust isn’t with the show anymore, its still her world.  The only issue that could happen is for Faust to say one thing, and the show end up saying another.  Kiara-Tsume-Howllet basically asked how did Twilight get to keep Spike.
Faust:  Here’s how I had it worked out — Spike was actually raised by Celestia while Twilight was her student.  Dragons are all myserious to ponies.  They don’t really know much about them and had never seen a baby one before so Celestia took on the challenge herself.  While raising him, she was able to train him to do that whole magic letter sending thing, and Celestia put the two together knowing that would come in handy one day.  Plus, Twilight hatched him, so it was only fair to let her stay in his life.
I don’t know if a different back story will ever be revealed so, as always, my indeas shouldn’t be considered canon.
Tags: news
← S2E11 Hearth’s Warming Eve (YouTube / Video)
Comic: Mine by Equestria Fadri →