It Begins (1 second of Season 2 Leak) 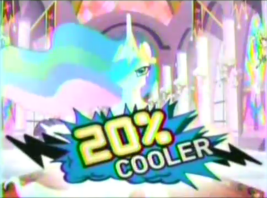 Apparently at least one scene of Season 2 was leaked on a promo commercial this morning on the HUB.  It only features ponies for about 2 seconds, the first scene of Twilight (see EqD’s image) and then the second scene above.  People of course are jumping at the “20% cooler”, but its been obvious for months that the HUB is well aware of us.

What I take from the scene is what you can see.  From the looks its Celestia walking/marching down a main corridor of Canterlot, from the split second of video before the 20% pop ups, I can see at least Rarity (and probably the mane cast) walking with Celestia.

Or epic march to war.

Link to the delicious video