And you know things are legit when they tell you its FUNNER.

So we have not done an update on the #LasPegAssist charity drive all day. If you have been hiding under a rock, well Las Pegasus Unicon, the first brony convention of the year went down like the Titanic on Sunday. The convention people overextended their funds five digits and ended up being unable to pay for the hotel, the compensated rooms given to people, the voice actors and basically anyone and everyone who was involved.

When the crap hit the fan thankfully everyone involved with the convention (and they had most of the major media sites there) grouped together and began a charity drive to help cover these costs. Of course at the top of the list were the MLP crew who didn’t get paid a thing. A few like Tara Strong and John de Lancie waved their appearance fee to the convention and were happy enough to just get the money they spent on food, the hotel and transportation. At the moment the money that is being raised is for people who were charged by the hotel due to their compensated rooms, and in the end money will be sent to the multiple charities who raised a good deal of money at Unicon, that vanished by the hands of the convention people in an attempt to pay off the hotel and VAs.

At the moment the full story is still unknown, except the convention went down like the Titanic. Due to the fact that the convention staff crumbled under the pressure, the pony media sites banded together in an attempt to salvage what we could from the ship. Beyond the general failure of this convention this has the potential of causing major problems with future conventions this year. In short, big daddy Hasbro is not happy.

And of course from the fandom site we will be taking action to ensure that any future convention that is advertised on our sites, is confirmed not to be a disaster waiting to happen. But of course unfortunately there were no signed of this with Unicon. More news will be posted on this down the road.

As for DHN, we have been comp’d our hotel room so if you’re looking to give money, give it to #LasPegAssist for anyone else who got hit with bills. We will be doing a write up about the convention itself in the following days, and reporting on any other information that may be needed to be told. Currently there are plenty of people investigating into this.

So for now, here is an update on LasPegAsisst:

Update from Coder Brony and the Brony Thank You Fund group.

1) If you lost money at Las Pegasus due to the hotel not honoring your comp, or double-billing, please fill out this form immediately: HERE.

If we do not have your request in and vetted by Saturday night, we will not be able to get you funds.

2) Just added to the auction, a piece of My Little Pony: Friendship is Magic history. The original index cards used by Lauren Faust and Amy Keating Rogers to break down the following episodes:

If you are one of the victims of LPU—e.g., because you weren’t compensated for your room as promised or you are a vendor stuck with vendor bits—then please file a reimbursement request with the LasPegAssist fundraiser today using this form. The deadline has been extended till Saturday, March 2, 6 p.m. EST. You’ll be asked to provide receipts.

There is now a dedicate site to this charity drive/auction. The general concept is to help out the MLP Crew and EVERYONE who got screwed over by the convention. And much like any other disaster the community, ALL of it has come together. Currently /mlp/ digging up information about the convention people, while the media sites have setup this fund to help people recover the costs of their hotel rooms and travel expenses. Someone did start a rumor that this entire thing was nothing but a scam itself, but if you feel that ALL of the media sites are trying to screw you over, think again.

Donations to LasPegAssist have gone as so:

Amy Keating Rogers is currently auctioning off three t-shirts she wore at Unicon. A Derpy Shirt, a Brony Shirt, and a Doctor Whooves Shirt. Meghan McCarthy is also auctioning off a Derpy shirt here.

The above are story cards used by Lauren Faust and Amy Keating Rgoers to break the story for Applebuck Season and Fall Weatehr Friends. They are also being auctioned off here.

Enterplay has jumped into the mix and offered up an entire set of series one cards, along with autograph cards. The bidding can be found here.

Pixelkitties is currently auctioning off two of her Las Pegasus Unicon shirts as seen above. The phrase is basically “I went to Vegas and all I got were these lousy wings”. Currently two auctions.. 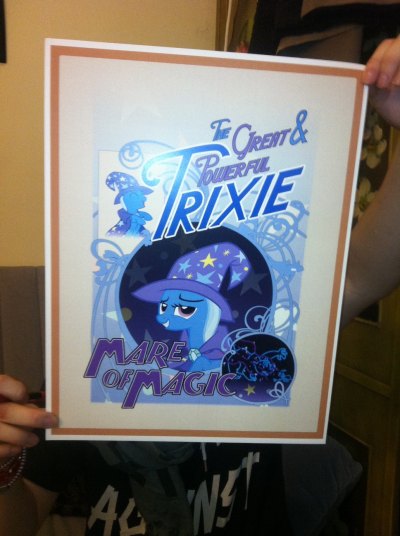 And there is a ton of more stuff being sold over at Bronies.com all for the LPU Assist fund.

[Edit:  All the auctions end on Midnight PST on Saturday — Doc]

Also last night Final Draft of the Everfree Network did an AMA over their stream channel that contains a ton of answers to the random questions people had.