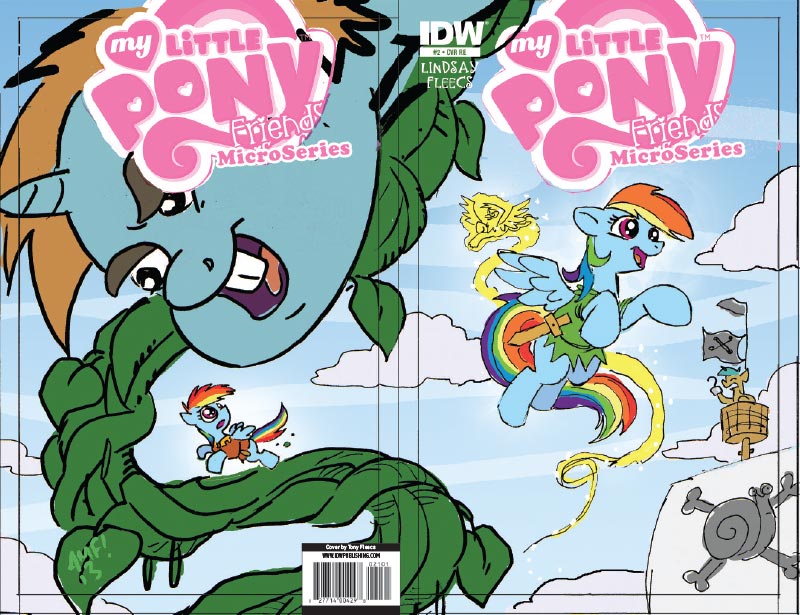 The last time I reviewed the My Little Pony mini-series, I was not too fond of it. The inking was terrible, backgrounds were vacant, and the pacing was so slow I missed references on the first read through; giving the comic a two-star rating out of five. I also recommended it for collector’s value only. Issue two starring the best flyer in Equestria, Rainbow Dash, does not have these problems. Mostly.

So many levels of awesome!

As you can see from the page above there are still inking concerns, but it is not as problematic like last issue. The outlines are dark enough so they do not blend in with the background. Although, it does make some of the faces look a little awkward at times. Speaking of backgrounds, they actually exist in this comic.

The story surrounds Rainbow Dash and her patented Sonic Rainboom at the Summerfell festival. When she goes too fast after breaking Mach-10 speeds with a guitar in her hooves, (PHYSICS!) she slams into a storm cloud piloted by two gremlins. Their goal is to pretty much make everypony’s lives miserable with the gloomy weather, which does lend to some humorous bits with Rainbow Dash and the townsfolk being interviewed by PNN. So, does this affirm ponies utilize televised media?

I see the Tasmanian Devil ballet classes payed off.

In any case, the comic is much more enjoyable than last time. There is a sense of urgency that ties the reader in, much better than in Twilight’s comic. The storm cloud is making a lot of trouble not just emotionally, but it is also affecting plant growth as demonstrated with Applejack in the apple grove. However, the urgency is sort of downplayed when there are other factors involved.

First of all, where is Pinkie Pie? She is, after all, the pony whose job is to make everypony feel good in the town. Then again, the reader is unsure of the continuity of the comic to the actual show. Speaking of continuity, there are some continuity hiccups throughout the book from panel to panel. For example, one method Rainbow Dash tries to do to remove the cloud gremlins is ensnare the cloud in a rope net and drag it off somewhere else. This is all fine, but from the panels it looks as if she either made the rope with the lightning from the cloud, or she pulled the rope from out of nowhere. (Again, PHYSICS!)

Those hiccups, however, do not detract from the overall story. It is a very fun read with a couple of flaws here and there. I can recommend this book for more than just collector’s value.

Next time the writer and artist from the main comic, Katie Cook and Andy Price respectively, are in charge of the Rarity issue.