Delicious Season 2 screens from a press release found here.  The top three are definitely Season 2, while the other three are kind of vague, and could be season 1.  (Update – Gasping picture below in HD).
Also randomly found in the press release, general character bios.  See after the pictures after the page break for a copy.

The above picture is something you really want to look at.  The other pictures (for the moment) are LD, where as someone found an HD version of the above.  Someone was pointing this out on /co/, but take a look at the stain glass windows.
Now maybe I’m crazy, but this is probably a very good insight on the first episodes.  The first thing you’re going to see are dragons.  One brown one (on either side).  The next window is the same design of the brown one, except white, with what can only be assumed as Celestia and Luna circling.
Go further, the window on the right side, extreme front, shows the mane 6 below some sort of symbol.  On the left side, three windows back, you see something that very much resembles puppet ponies, three of them.  Now this might be stretching it, but isn’t the colors very close to Cutie Mark Crusaders?  You be the judge.

Celestia reveals to the Mane 6 that Discord is actually a disemboweled corpse she keeps in her fridge.

Update 9/08/2011:  Its been more or less confirmed that the descriptions and several of the more generic pictures here are from Season 1, namely the three below.  It has also been announced that the MLP Facebook will be posting 1 new screenshot per day until the new season, details found over in this post… 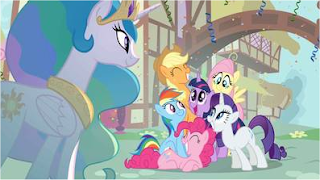 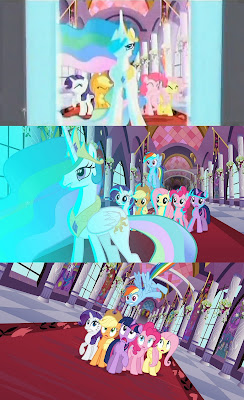 Spoiler…  Someone posted this up, and well, it makes sense.
MLP Character Descriptions
TWILIGHT SPARKLE-
Dutiful and intelligent, TWILIGHT SPARKLE is obsessed with one thing: studying magic!  She once studied so much, she made no time for anypony else. That is until her mentor, PRINCESS CELESTIA, charged her with the study of a special kind of magic— friendship!  Newly converted to the joys of having friends, she uses her knowledge and unusually powerful gift for magical spells to help her new companions in PONYVILLE.  Though sometimes she gets on her “high horse” about what’s right or wrong, her eagerness to learn and lend a helping hoof endear her to her new friends in PONYVILLE, and when the going gets tough, her love for her friends transform her into a natural born leader!
RAINBOW DASH-
Capable and athletic, RAINBOW DASH lives for adventure!  When any problem should arise that involves traveling to distant lands or dealing with a magical, mysterious beast, RAINBOW DASH is the first to volunteer! Brave and bold, anypony who has ever seen this rainbow-haired Pegasus in the air has been left in jaw-dropped awe of her speed, agility, and, well, her confidence. She’s quite positive she’s the fastest pegasus pony alive, and truth be told, she probably is.  Yes, she’s a bit proud, and a bit mischievous, and when the chips are down, and danger is a-brewing, RAINBOW DASH always, always comes through, proving time and time again that she is a true hero!
PINKIE PIE-
To say that PINKIE PIE marches to the beat of her own drum is certainly an understatement! Giggly, playful and brimming over with energy, it’s not unusual to find this pink pony prancing and skipping joyfully through the streets looking for fun, doing cartwheels, singing a song in a silly voice and making up her own ridiculous lyrics. By far the silliest pony around, nothing makes her happier than evoking a giggle and a smile from her friends. She is the freest of free spirits, always acting on her whims, following her heart, talking your ear off and getting a laugh or two along the way.
APPLEJACK-
Having grown up working hard to keep her family’s famous apple business growing, APPLEJACK has come to be known as the most down-to-earth, resourceful and dependable pony this side of PONYVILLE!  A proud farm pony to the core, she’s not afraid to get her hooves dirty and to her, there’s nothing a little horse-sense and elbow-grease can’t take care of.  APPLEJACK has an impeccable ability to break a situation down to its core and fix it fast and usually topped off with a wacky country anecdote told with a charming dose of country twang.
RARITY-
RARITY could possibly be the most beautiful unicorn you’ve ever seen. As she prances down the street, her coat gleaming pure white and her royal purple curls bouncing, everypony’s head turns— and boy does she love it! A talented fashion designer, her biggest dream is to one day design for PRINCESS CELESTIA herself.  At first glance she may seem a typical debutant, vain and entitled, but it’s simply not so! Generous to a fault, she’s believes so badly that the world should be beautiful she’s all too eager to simply give away the designs she works so hard on and to offer anypony a custom RARITY makeover.  And should you make it through one; you’ll learn that RARITY’s greatest beauty is her heart.
FLUTTERSHY-
A graceful, fawn-like filly, FLUTTERYSHY’s gentle, serene ways make her unusually attractive to all types of forest animals, whose care and well-being are her highest priority.  She’d like nothing more than to spend every waking moment caring for her animal friends in her secluded meadow cottage, and that’s because FLUTTERSHY is, well… shy.  Sweet, soft-spoken and often fearful, her pony friends treasure her kindness, but have to work hard to help come out of her shell.
Tags: news
← Submission Tuesdays II
RedBubble and Pony Art →