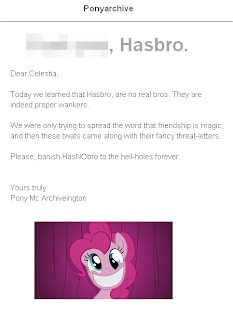 Over the weekend PonyArchive had purchased the domain ponyarchive.eu and I do believe carried a message that if Ponyarchive.org gone down, that it was a backup.  Obviously they got another letter from Hasbro, probably since they had not ceased or deceased.  So that means it was indeed Hasbro which brought the site down.

Its not my place to lay comment on this, but the message left behind by PonyArchive leaves a foul taste in my mouth.  Hasbro isn’t suppose to be a bro, its a faceless company that wants money.  The other “bros” in this fandom is going to be Studio B who actually creates the show.

There has never been anything written that said we could pass around their videos.  The company has been kind (and possibly blind) to the fact that we’ve gone a year.  Bottom line is the DVDs for Season 1 are coming, and they’re obviously aware they might make money off us.

It is hard to say, if anything else will happen.  Its very possible that Hasbro has begun to take down youtube channels and such, due to the DVDs.  It would be nice if something official was announced.  But for now and without any further evidence, all we can do is wait.


I would like to officially go on record as saying that I have had nothing to do with PonyArchive since the first Cease & Desist hit, and I would like to disassociate myself from the message currently up on the site. I find it an incredibly immature act and I do not think it a wise course of action at all. (simonAJ)

Equestria Daily has gone on record to say that they won’t be posting any more downloads or youtubes from now on (we have email correspondence from them about this matter) they will only be plugging the itunes for now. (Update via Spazz)
___

I came across this article on a site called BronyFarm, it doesn’t seem to give any specific name but sounds like simonAJ answering a few questions about the situation.  Figure I’d add it to this article since its very popular.  Article can be found here.
___


12/22/2011 – According to the EqD’s Nightly Roundup #194, it is said that PonyArchive has some sort of trojan redirect on their site.  We find no evidence of this, as myself and several others have checked the page, the code, and so forth.  So either it was there and was removed, or someone got spooked.  Either way, why bother going to the site, all you get is the picture above.