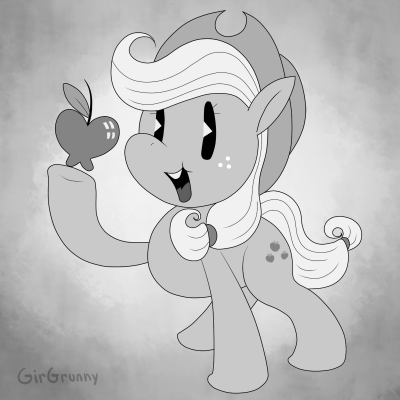 If you have ordered the Enterplay MLP Trading Cards from ToyWiz.com, seems the orders are being shipped out today. Thanks to DCJoeDog who sent us an e-mail yesterday about a tweet to ToyWiz about the cards, who replied that the cards were arriving yesterday, and then another e-mail to confirm they received a tracking order.

And if you haven’t really looked at the cards, we’ve collected information that was given to Equestria Daily on several facts about the cards, including a ten card preview.

Unrelated to the trading cards (but since I noticed them while check ToyWiz for the card ordering links) I see there are now three figure sets up for pre-order. These are the figures we saw early which includes Granny Smith, Gilda, and Spitfire.

The Enterplay Trading Card set has been produced aimed towards this community, as several artists from the community were hired by Enterplay to produce most if not all the cards. Each pack contains 4 cards, one which always will be a show location, and another a sweepstakes card), 1 foil/standee and a pony tattoo. In total there are 137 cards with a total of 12 tattoos (6 are cutie marks), 9 Pop Up Steendees, 84 Base Collectable Cards and 32 Foil Cards.

The Sweepstakes cards have an online code you can input for a chance to win one of 500 autographed cards, or a complete set of the series.

The cards were pre-released at Bronycon. 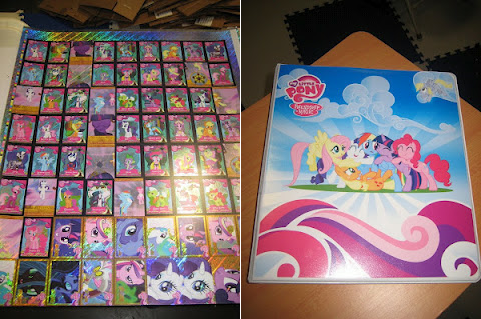 In the future there will also be a giant folder for collectors to hold their cards. A preview of this was on display at Bronycon, seen in the above right picture. The giant sheet on the left was a donation to the Bronycon Charity Auction from Enterplay.

And then thanks to Equestria Daily who got some insider information, I believe from the individuals from the community who worked on the cards. We attempted to get some information from Enterplay themselves but never got a reply back (guess they’re not fans of free advertising). So below is the 10 day preview EqD had before Bronycon.

If you are pondering what the backside of these “double background pony” cards has to offer, there are also some pictures. 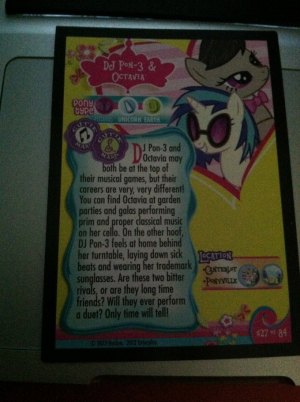 DJ Pon-3 and Octavia may both be at the top of their musical games, but their careers are very, very different! You can find Octavia at the garden parties and galas performing prim and proper classical music on her cello. On the other hoof, DJ Pon-3 feels at home behind her turntable, laing down sick beats and wearing her trademark sunglasses. Are these two bitter rivals, or are they long time friends? Will they ever perform a duet? Only time will tell. 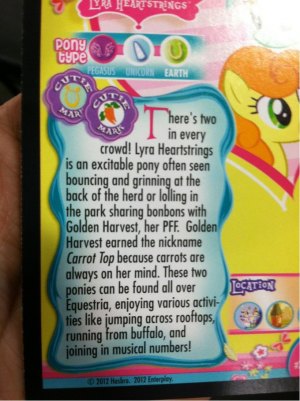 There’s two in every crowd! Lyra Heartstrings is an excitable pony often seen bouncing and grinning at the back of the herd or lilling in the park sharing bonbons with Golden Harvest, her PFF. Golden Harvest earned the nickname Carrot Top because carrots are always on her mind. These two ponies can be found all over Equestria, enjoying various activities like jumping across rooftops, running from buffalo, and joining in musical numbers!

Would you want to be the mayor of a town that is attacked by parasprites, dragons and Cerberus, all at the drop of a hat? This Mayor happily serves her citizens, armed with inspirational speeches the likes of which Ponyville has never seen! And who is her official town timekeeper? Time Turner, the pony responsible for keeping Ponyville’s clocks in sync, setting the hourglass for cider competitions, and pretty much all things timey wimey.

It was also noted by the submitted of the Mayor / Time Turner picture (NinJay) that Timey Wimey is a shout out to the Doctor Who series, as in the fandom Time Turner is known as Doctor Whooves (Hooves).