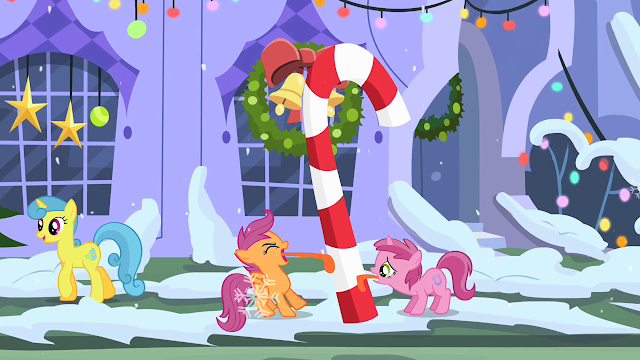 Written by Merriwether Williams
Fan Rating: 9.1 out of 10
This episode seems to be receiving mostly positive reactions, but mixed with a lot of “not what I was hoping for”.  Being that the Halloween special was such a classic, it’s not hard to see why folks got their hopes up.  As it was, we saw little in the way of Pony Holiday Cheer or even any winter fashions, Rarity’s hat excluded.
It should be pointed out that some went into this episode with a negative bias when the writing credit came up.  Yes, this is the second episode from Merriwether Williams, writer of the only pony episode I didn’t like, “That Time We Dressed Up As Superheros And A Lot Of Folks Nearly Died, But It’s Okay Because Dash Was Being Slightly More Boastful”.  That said though, I think she did a much better job this time around.  Mostly. 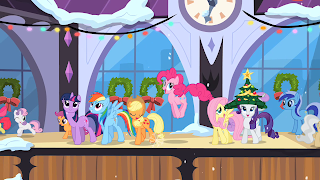 We start our episode off showing that ponies have finally learned that train engines are supposed to pull the train, not be pulled.  Maybe they ran outta coal on their way to Appleloosa?  Anyway, the girls are all flipping out because they’re on their way to Canterlot.  Once there, they waste no time before playing “Eye Spy”…

They play it wrong…

Let’s… go to the opening theme. 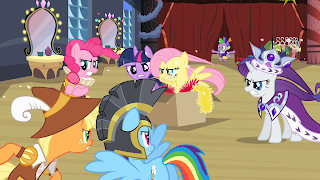 We come back to a parade of pretty ponies pouring inside Canterlot Castle to watch a play performed by our pack of pals.  We get treated to a trip backstage where we see various ponies getting ready, including our favorite girls.  The girls are all having little issues, Fluttershy is flipping out about being seen by everypony, Rarity is happily flipping out about being seen by everypony, Rainbow is thinking herself the star of the show, Applejack is being a bossy pants, Pinke being silly, and Twilight wants them all to just not embarrass her in front of Celestia.  Business as usual. 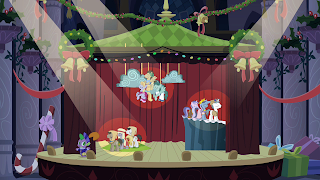 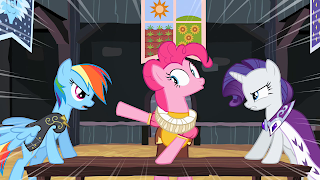 Apparently before Equestria and the rule of Celestia (and Luna) ponies of different types didn’t get along.  The unicorns controlled day and night, the pegasus controlled the weather, and the earth ponies worked the lands and gave some of their food as tribute to the other two as one would do as peasants to royalty, or business owners to mobseters, or you when you pay your taxes.
Things worked fine (if not happily) like this for many generations until a unending blizzard hit the land and drastically reduced the food supply.  The three races react in the traditional way, blaming each other.
Also, hey, what’s with the freaky ghost horses? 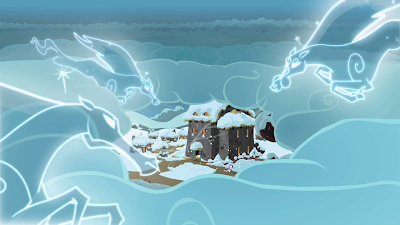 Probably not important.
With negotiations broken down, each of the three rulers come up with a different brilliant plan.  The plan is to leave and go somewhere else.  And it’s all the same plan.  And they all do it badly.

The three different races all come upon a new and untouched land that is perfect for their needs.  But it’s the same land.  And they all claim it as their own.  The bickering resumes.
Oh hey, it’s snowing and those ghost things are back. 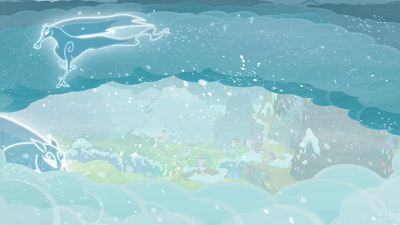 The three leaders and their respective toadies take refuge in a nearby cave and begin to diplomatically divide up the cave and fight over rock ownership.  The three leaders promptly freeze to death solid.  Thus leaving their three assistants to bask in the peace and quiet. 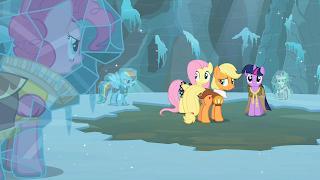 Well they would if not for the friggin Windigos swirling around and eating their hate.  With the realization that they’re all kinds of doomed for hating each other, the three decide that now would be an excellent time to come to a common understanding.  That understanding is that they hate their leaders.  So their hatred leads to friendship which defeats hatred…
Anyway the magic of their friendship makes a big flaming heart that drive off the Windigos. They keep the firing burning long enough to thaw their new land and their leaders who all decide to be bros and form a new nation together.  That nation was Equestria.  Aaaaand /scene.
Then our audience and stage performers sing a neat little holiday song about friendship and what not. 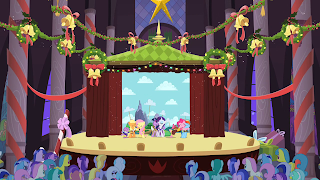 Then we go back stage and the girls resume fighting over an open window.  They then remember the play that they just did and how they don’t want to die in ice so they close the window and laugh.  Pan up to great big flaming heart and THE END.
If this look back seemed short it’s because, well, this episode was really straight forward and the only things that really kept it going were the gags during the play.  That said, the play was friggin funny as heck.

The three rulers stole the show with their bossy attitudes, insane leaps of “logic”, and just being general jerks.  Naturally this has lead to people arguing that the girls were acting out of character which makes sense what with them playing different characters.  Although I loved how absolutely vain and whiny Platinum was and was endlessly amused by Hurricane’s militaristic attitude; it was Puddinghead who won my heart with antics that actually outdo Pinkie Pie.  She can think outside the box and inside the chimney.  Can you? 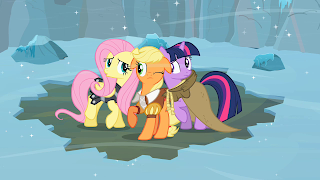 This actually brings up a bizzare trend I notice online with folks judging the characters based on how they remind them of folks like that.  As in, they don’t like characters they wouldn’t personally hang out with.  I find that to be utterly silly; yeah Hurricane would make for an incompetent leader, but she made me laugh and that’s all I care about.  Where as, the other three, Clover, Pansy, and Smart Cookie were rather boring to me unless they were interacting with their leader.  Pansy in particular came off as a passive aggressive jerk as soon as she was not doing prat falls for Hurricane.
We got some new creatures this week, those freaky ghost horsies, the Windigos.  Classically, Windigos are spirits of cold, greed, and cannibalism; all things one would have to worry about when living through harsh winters.  They are mythical creatures created to encourage cooperation among settlers in tough times when tempers can easily fray.  Also, they’re friggin scary.  Traditionally, a Windigo would look more humanoid, but as this is a pony world, their ghostly horse appearance works.

There was some fun little background and side characters running about this episode.  Derpy got three cameos (on the train, at the curtain, and backstage at the end) my favorite being when she peeked out the curtain and waved to the audience only to receive a scolding look and slink away (you’re still a star in my eyes!).  We got some familiar ones mucking about either in the audience or the show itself, including Carrot Top practicing her singing back stage and Lyra both heralding Platinum’s entrance and being in the audience at least four times at once.  The most notable new background was a grey stallion pegasus with a rainbow cutie mark that showed up frequently and even tried to eat his hat out of hunger.  For fun, I’m going to call him Stormy Skies due to his drab coat and mane coupled with his colourful cutie mark. 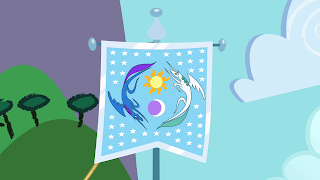 Now there have been two crazy big points of contention I’ve seen argued about around the fandom.  One, that the play contradicts the history of the world that we have been presented with thus far.  This is incorrect as the history we have been given up to this point has been about Equestria and this play showed its foundings, so it’s before Equestria.  The biggest part of their complaint is that the ponies raise a flag with the Royal Pony Sisters on it when they declare the land to be Equestria.  This can be explained easily in two ways, modern flag used much as they do in school plays for the founding of America or that Alicorns were things of legends back in the day and made for a good symbol of peace amongst the pony races. 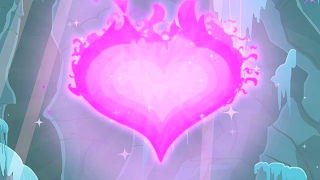 The other thing, strangly enough, is the big flaming heart.  I mean, this is a world where friendship literally makes magical things happen up to and including defeating beings of pure chaos that obey no rules of physics; by comparison, making a big glowy heart isn’t that silly.  And at the end, maybe the play was designed with the intent to create pony camaraderie  thus reigniting the heart each year as a warming winter wonder.  Or maybe they were just trying to call the Powerpuff Girls. 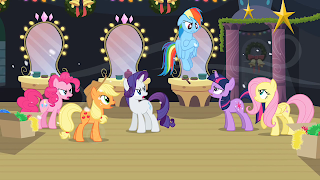 There are a few things that bother me personally though.  The opening and the ending specifically were big ones.  The whole cold opening was just… dull and they played Eye Spy wrong.  I mean, sheesh.  As for the ending, we had the girls fighting over a window.  It worked before the play as it showed them all being a bit nervous in their own ways, but it was just such a weak ending.  They should have closed out with the play, song, pan up to heart and boom, show over.   Both scenes just seemed like wasted time that could have gone to something better, like Celestia and Luna cameo watching the play or Derpy the red nosed reindeer, two things I was very much hoping to see.
Another little complaint I have is the song.  It’s all well and good as a holiday hymn, but it didn’t feature that which I look forward to in all the songs, the girl’s voices.  This was just a big choir affair and as such, didn’t really strike a chord with me and isn’t one that’ll be stuck in my head a year later.
So, all in all, it was a fine enough episode that wasted some time and had a decent song.  For many it failed to deliver the world building or holiday-ness that was hoped for, but it did have many many many funny gags and some genuinely heart warming little touches throughout.  Happy holidays all, and we’ll see when you next there is new pony. 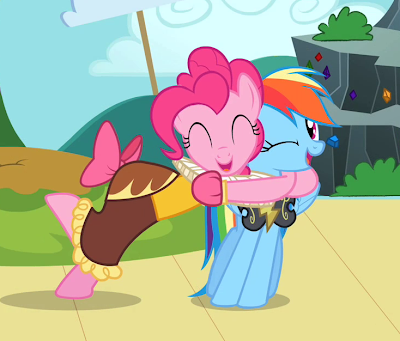